This week you find me at the Chess Megafinals being held at Worcester University. Sam and two of his friends from school have qualified for this event and now face six matches over the day hoping to gain enough points to make it to the Gigafinals! Looking around I can see several competitive dads, chess games underway, discussing tactics and openings. It's hard not to notice that the subcontinent is well represented at this event. Sam and his friends appear to be limbering up on their Nintendo DS's. It is going to be a long day but perfect for me to catch up with the Blog.
Let me start with an evening at the neighbour's. A chinese take-away was being devoured and as I remember it I was enthralling everyone with my sparkling wit and poetry when the world began to tilt at a strange angle! Everyone just watched as I slowly disappeared from view as the back legs of my chair did the splits. Soon only the soles of my feet were on display.....naturally Andrea and our neighbour Chris were hugely concerned over my well being....which they managed to disguise by shrieking like witches with laughter for the next three or four days! I hope they wee'd themselves! Andrea hasn't laughed that much since I hit my shin with a hammer or that time I slipped down the stairs.............I'm beginning to spot a pattern here.......Me + pain = Wife + happiness.
Sam has won his first match!....and is now running about outside. Others are practising chess.....obviously the overall winner is going to be one of these kids. Should I be trying to turn Sam into a new Karpov or Rooney?
The low light of the week was the loss of our chickens Roxy, Pootle and Amber to a fox. I've heard of foxes going into a killing frenzy before with chickens but it was still a shock to find them all dead. We had one very sad daughter for a long while. Now she has seen pictures of a ridiculous looking bantam called a Poland...so many head feathers it can hardly see where it is going!........so the hunt is on. 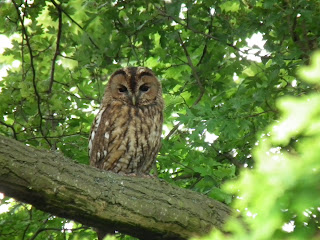 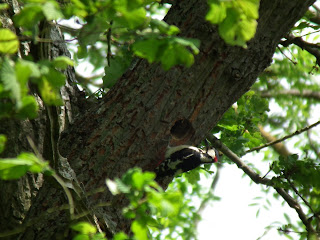 Whilst I'm on the subject of birds, the peregrine chicks are all doing well and flexing their wings already. I managed to get some good pictures of the tawny owl the other evening and could see a chick, well a big ball of fluff with two black eyes, in the entrance to the nest box.
This Greater Spotted Woodpecker was feeding chicks nearby, they make so much noise it's easy to spot them this time of year.
Another win!...that's two points.
Now some sculpting news. I'm often asked where my ideas come from and it's actually a difficult question to answer......no..not because I trawl the internet and steal them but because they can come from almost anywhere. For example the other morning I was woken by the dawn chorus and looked at my clock to see it was barely 5am......thanks birds. I then wondered how birds felt about having to get up so early just to have a bit of a sing song. Imagine being a bird if you were not a "morning person"  I suppose it is this anthropomorphic attitude to animals that is the germination of so many ideas. The thought of some hung-over or bad tempered birds reluctant to join in with the singing made me smile....even at that ridiculously early hour. Luckily I still remembered the idea in the real morning (after 8.30 am) and hopefully it will become the subject of my next model.
Yet another win..three points...and lunchtime.
Posted by Sculptor Pete at 08:11 No comments:

Life isn't just bird watching, golf and rocking gently in a dark corner....sometimes I need to work. This last week I was thinking of ideas for the annual Black box and was making a list of exotic, or do I mean stomach turning, foods that in certain parts of the world are seen as delicacies. This list included monkey brains, traditionally eaten straight from the skull. Birds nest soup, made from the saliva of swifts. Balut, which is a fertilized boiled egg containing the foetus of a duck or chicken, baby mouse wine, tuna eyeballs, live octopus and Rocky Mountain Oysters........young bull testicles. 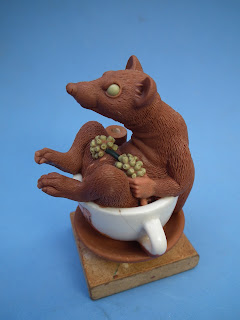 Plenty of candidates there for consideration....but then I came across Kopi Luwak. This is the most expensive coffee in the world and yet is made from civet cat poo. The Asian Palm Civet eats the coffee cherries which then pass through its digestive system leaving just the beans. The droppings are collected, washed and roasted before being turned into something that people with too much money feel the need to buy. My box shows a palm civet delivering a fresh batch of droppings straight  to the coffee cup.....mmmm.
Posted by Sculptor Pete at 10:53 4 comments: